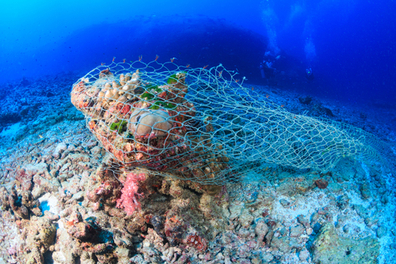 The European Commission has tabled an important legal proposal to tackle marine litter. By introducing new measures on single use plastics as well as derelict fishing gear, the proposal will contribute to Europe’s transition towards a Circular Economy.

Fishing gear (nets, lines, pots, traps…) accounts for 27% of all beach litter. With its proposal, the Commission will encourage all actors involved to get a maximum of derelict gear back to shore and include it in the waste and recycling streams. In particular, producers of plastic fishing gear will be required to cover the costs of waste collection from port reception facilities and its transport and treatment. They will also cover the costs of awareness-raising measures.

This new measure builds on existing rules such as the Marine Strategy Framework Directive and complements other actions taken against marine pollution, such as under the Port Reception Facilities Directive.

The proposal will now go to the European Parliament and Council for adoption.

Why is fishing gear included in the Commission’s proposal to reduce the impact of certain plastic products in the environment?

Abandoned, lost or disposed of fishing gear accounts for about a third of marine litter found in European seas, or over 11.000 tons per year. Almost half of the “great garbage patch” in the Pacific Ocean consists of such fishing gear. We estimate that in the EU, 20% of gear is lost at sea. The reasons for this loss vary, ranging from accidents, storms and entanglement to intentional abandonment.

How will this proposal help solve the issue of abandoned, lost or disposed of fishing gear?

The plastic used for fishing gear is of very high quality, but the proportion recycled is small. Only 1.5% of gear gets effectively recycled. That is why the proposal provides tools and incentives to facilitate recovery, re-use and recycling of the plastic material in fishing gear.

More specifically, we want to close the loop by adding Extended Producer Responsibility (EPR) schemes to the existing measures. This will ensure that managing fishing gear plastic litter, once it has arrived on shore, is the responsibility of the producers.

With this proposal, all fishers can be confident that gear returned to shore will be properly managed in a dedicated waste and recycling stream.

I’m a fisherman. Why should I return fishing gear back to the port?

Fishermen already have the obligation (Council Regulation (EC) No 1224/2009)  to retrieve or report lost gear.

This can boost long-term productivity. As a fisherman, you have only to benefit from a clean ocean. Estimates of the costs of removal of litter from nets, damage to catches, repairing gear, entangled propellers and obstructed cooling systems are between 1 and 5% of revenue.

And the threat is increasing. Because plastic only degrades over timescales of centuries, it is accumulating in our seas and oceans. Left unchecked, it could threaten the seafood industry.

What about the waste that is generated by other ships? Shouldn’t this also be covered?

The proposal for a revision to the new Directive on Port Reception Facilities(COM(2018)33 final) goes a long way to ensuring that ship generated waste is delivered to adequate port reception facilities, instead of being discharged at sea.

The Directive regulates discharges of waste from all ships at sea, including from fishing vessels and recreational craft. It requires EU Member States to provide for adequate port reception facilities, and ships to deliver their waste to these facilities before departure from the port. It also requires Member States to set up cost recovery systems, which must provide no incentive for ships to discharge their waste at sea. In 2018, the European Commission adopted a proposal for a new Port Reception Facilities Directive, with a special focus on addressing marine litter from sea-based sources.

How does the Directive on reducing the impact of certain plastic products on the environment facilitate fishermen to return their gear?

Up to now, ports have been able to charge fishermen for bringing retrieved abandoned, lost or disposed of fishing gear ashore over and above their normal fee. The Commission’s proposal to revise the Port Reception Facilities Directive (COM(2018)33 final) removes this disincentive. However, ports’ costs for expanding facilities and running them could find their way back into the port fee; thus increasing the overall cost for fishers.

This is where the Extended Producer Responsibility comes in. Under this scheme, producers take on the responsibility (and the cost) for managing fishing gear plastic once it is landed. So, this will reduce port costs for fishers, particularly in small fishing ports, and it will accelerate the development of a dedicated waste stream for fishing gear waste.

Consequently, fishers will have a clear and unambiguous solution, at minimum extra costs, for the gear they bring back to shore, allowing them to comply with their legal obligations.

How much will the implementation of this Directive cost?

Examples from Icelandic and Norway show that effective schemes can lead to high return rates of gear that benefit the economy in general and the fishing industry in particular.

What about rewarding fishermen for fishing up lost gear?

Already since 2008, the European Maritime and Fisheries Fund and its predecessor the European Fisheries Fund provide financial support for the recovery of litter and gear from the sea as well as the improvement of waste handling infrastructure and management processes on vessels and at ports. For the period 2014-2020, €53 million has been allocated to such projects.

This measure is dealing with gear lost over previous years. It will reduce the amount of gear in the sea but not prevent further losses. This is therefore complementary to the current proposal.