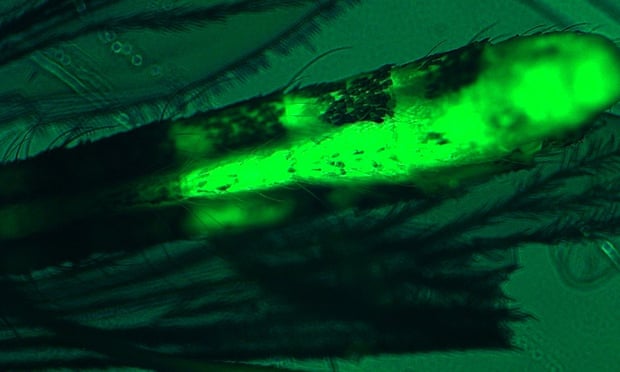 Scientists fed microplastics to mosquito larvae, which live in water, but found that the particles remained inside the animals as they transformed into flying adults. Other recent research found that half of the mayfly and caddisfly larvae in rivers in Wales contained microplastics.

Concern over microplastic pollution is rising rapidly as it is discovered in ever more places, and very little research has been done on how it may harm wildlife or humans. The particles can harbour bacteria or leach toxic chemicals. Microplastics have been found in tapwater around the world, in vast numbers in the oceans and sea creatures and even in remote Swiss mountains.

“It is a shocking reality that plastic is contaminating almost every corner of the environment and its ecosystems,” said Prof Amanda Callaghan, at the University of Reading, UK, who led the new research on mosquitoes. “Much recent attention has been given to the plastics polluting our oceans, but this research reveals it is also in our skies.”

The new study, published in the journal Biology Letters, used Culex pipiens mosquitoes, as they are found across the world in many habitats. The researchers found the larvae readily consumed fluorescent microplastic particles that were 0.0002cm in size.

“Larvae are filter feeders that waft little combs towards their mouths, so they can’t actually distinguish between a bit of plastic and a bit of food,” Callaghan said. “They eat algae, which are more or less the same size as these microplastics.”

The larvae matured into a non-feeding pupa stage and then emerged as adult mosquitoes, which still had significant microplastic within them. The researchers are now studying if this damages the mosquitoes.

Callaghan said it is “highly likely” that other flying insects that begin as water larvae will also eat and retain microplastics. Birds, bats and spiders are among the species that eat large numbers of insects, suggesting these are also consuming microplastics. “You can get swarms of insects,” she said. “You could have a lot of plastic going up. It’s totally depressing. These plastics are going to be around forever.”

Plastics have been found inside many seabirds, but this is the first research suggesting terrestrial birds that eat insects are at risk. “This is a new pathway to get plastics up in the air and expose animals that are not normally exposed,” said Callaghan. “We don’t know what the impact will be.”

Matt Shardlow, chief executive of the conservation charity Buglife, said: “Aquatic insects are in the microplastic front line. We emit billions of plastic fibres every year, many of which go straight into rivers, so there is an urgent need for more research into the role microplastics may be playing in observed declines in aquatic life.”

Many microplastics are fibres shed by synthetic clothing during washing – a single wash can release 700,000 fibres. “While research proceeds, we can all think carefully about our clothing choices,” said Shardlow. Other microplastics are formed by the abrasion of larger pieces of plastic in rivers and oceans.

Large pieces of plastic are easily seen and clearly harm animals, from turtles to albatrosses. But research has also found microplastics, defined as smaller than 5mm, in many marine creatures, from worms to plankton and up the food chain to fish. Where investigated, they have been shown to damage the health of the animals.

Like the oceans, freshwater rivers and lakes are also heavily contaminated – a river near Manchester, UK, has the worst microplastic pollution yet recorded – but the impact on wildlife in these habitats has been much less studied.

The research in the Welsh rivers found microplastics in larvae both upstream and downstream from wastewater treatment plants, indicating that plastic pollution enters rivers directly, not just via sewage.

The researchers, led by Prof Steve Ormerod at Cardiff University, said the overall dearth of data on the effect of microplastics on freshwater creatures means that the understanding of the risk to the ecosystem remains “seriously limited”.

It is widely accepted that humans are also consuming microplastics. “We all eat them, there’s no doubt about it,” said Callaghan. Eating seafood such as mussels or cod is one route, while beer, sugar and sea salt have all been found to contain microplastics. Exposure is likely to rise, as plastic production is expected to climb by 40% in the next decade, prompting scientists to call for urgent research on the effects of microplastics on people.