An enzyme that digests plastic could boost recycling

An enzyme that digests plastic could boost recycling 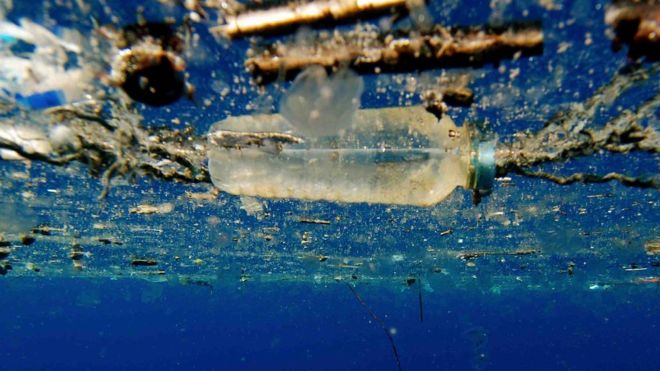 Scientists have improved a naturally occurring enzyme which can digest some of our most commonly polluting plastics. PET, the strong plastic commonly used in bottles, takes hundreds of years to break down in the environment.

The modified enzyme, known as PETase, can start breaking down the same material in just a few days. This could revolutionise the recycling process, allowing plastics to be re-used more effectively. UK consumers use around 13 billion plastic drinks bottles a year but more than three billion are not recycled.

Originally discovered in Japan, the enzyme is produced by a bacterium which “eats” PET. Ideonella sakaiensis uses the plastic as its major energy source. Researchers reported in 2016 that they had found the strain living in sediments at a bottle recycling site in the port city of Sakai.

“[PET] has only been around in vast quantities over the last 50 years, so it’s actually not a very long timescale for a bacteria to have evolved to eat something so man-made,” commented Prof John McGeehan, who was involved in the current study. Polyesters, the group of plastics that PET (also called polyethylene terephthalate) belongs to, do occur in nature. “They protect plant leaves,” explained the University of Portsmouth researcher. “Bacteria have been evolving for millions of years to eat that.” The switch to PET was nevertheless “quite unexpected” and an international team of scientists set out to determine how the PETase enzyme had evolved.

A high definition 3D model of the enzyme was created, using the powerful x-ray beamline at Diamond Light Source in Oxfordshire. Once they understood its structure, the team noted that they could improve the performance of PETase by adjusting a few residues on its surface.

This suggests that the natural enzyme isn’t fully optimized yet and there is the potential to engineer it. PETase was also tested on PEF plastic, a proposed plant-based alternative to PET that is similarly slow to degrade in nature. “We were absolutely stunned when we did that experiment because it actually works better on PEF than PET,” Prof McGeehan told BBC News.

The team behind the research at Portsmouth University includes PhD students and even undergraduates, and when I visited their lab their excitement was infectious. They know that it took clever chemistry to design the PET polymer used in so many billions of bottles and they are delighted to have helped find a way to unpick it. They have grown up with the scourge of plastic pollution and feel highly motivated about trying to tackle it.

Yet big challenges lie ahead in turning an ingenious discovery into a real-world application. Developing a technique for producing the enzyme cheaply will be one key hurdle; another will be to harness its power on an industrial scale. But this is an example of accelerated science. A type of bacteria evolved to live off plastic in the last few decades. The enzyme it uses to digest PET was only recently identified.

Now we have details of the newly engineered and more efficient version of that enzyme. In the search for scientific solutions to the plastic pollution crisis, momentum like this is vital.

Polyesters, industrially produced from petroleum, are widely used in plastic bottles and clothing. Current recycling processes mean that polyester materials follow a downward quality spiral, losing some of their properties each time they go through the cycle. Bottles become fleeces, then carpets, after which they often end up in landfill. PETase reverses the manufacturing process, reducing polyesters to their building blocks, ready to be used again.

“They could be used to make more plastic and that would avoid using any more oil…Then basically we’d close the loop. We’d actually have proper recycling,” explained Prof McGeehan.

The enzyme is a number of years away from being deployed on a widespread scale. It will need to degrade PET faster than its current time of a few days before becoming economically viable as part of the recycling landscape. Prof McGeehan is hopeful that this marks the beginning of a shift in the management of plastics. “There is an urgent need to reduce the amount of plastic that ends up in landfill and the environment, and I think if we can adopt these technologies we actually have a potential solution in the future to doing that” he added.